Game shows galore or how I learned to love anuncios

So far, my favourite Spanish TV show is ¡Ahora Caigo!, a quiz game with 10 contestants circled around a main player, who duke it out in head-to-head questions, until either the main player misses 3 questions (one life or green comodín per miss) or all ten players miss one question each. The odds don’t favour the main player, who does however get an extra comodín after 7 opponents. Prize money is randomly revealed after each round (€1, €500, €1,000, €2,000, or €5,000), and the main player can leave after 7 wins for half the money or receive another comodín and leave anytime thereafter for the accumulated money. Beating all opponents nets a cool €100,000, a seemingly rare occurrence.*

Oh yeah, when a player misses, he or she is unceremoniously dropped through the floor – hence the name, ¡Ahora Caigo! (Now, I fall!). Pronunciation is important here (khi-ee-go, not khi-go, which means something entirely different, more in keeping with the scatological game design).

Questions are asked by the host, a lively and fun Arturo Vals, who sings any questions that have song lyrics. He is very entertaining, though he can’t sing (well, every song sounds the same). He seems to be on a few other shows as well I’ve noticed with similar liveliness and fun, and various sizes of hair.

The question format of ¡Ahora Caigo! is like Hangman, which is why this is a good game for the language learner. Filling in the blanks is very good for the vocabulario. The ear is also well served as Arturo reads out each question as it is displayed. Questions go from the simple to the hard, with some international content (the easy questions seem to have more American content). Here are four, from the easy early ones to the harder later ones.** 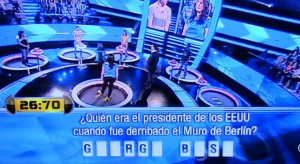 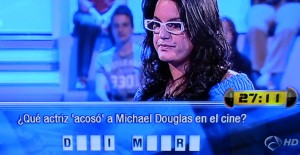 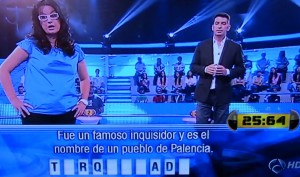 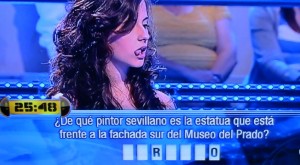 Although the game can be quite fast-paced it is often at a beginner or intermediate level with routine intro questions asked by Arturo of each new player and a similar banter throughout, for example,

Grammar ASIDE (double consonants) In Spanish, ll, rr, and cc are the main double consonants (with an occasional nn), which makes writing in Spanish easier than in English. No need to worry how to spell so much, just stick to single consonants. Hence, que aproveche (one p, literally meaning ‘take advantage’), atención, necesario (not necessary to remember how to spell necessary).

Unlike English and American game shows (especially Who Wants to Be A Millionaire?), there seems to be just as many women players as men, while the audience is mainly female, who in ¡Ahora Caigo! certainly love Arturo’s easy way. With his obvious charm, they don’t care that he can’t sing.

At my level, I don’t know whether it’s good to read and hear together, because the eye leads the ear. Perhaps when I get to a higher level, ¡Ahora Caigo! will deter my ear. For now, though, it’s perfect and when I get to the next level, I’ll try Pasapalabra. Maybe, when my ear is as fast as my eye.

Mind you, I haven’t yet figured out the anuncios – none for 45 minutes and then 20 minutes in a row (about 10 seconds each, which according to my math is over 100 commercials). Ugh and double ugh! Not sure the point, as one just turns the channel. To counter this, the commercials usually come at the climax and sometimes two sets in a row (after a return for 10 seconds!). Madness. It’s like the silent era where the villain with the bad bigote (bigoted?) ties Nell to the tracks as the train inches closer, but never quite gets there (all with a series of tight edits). Come to think of it, silence is golden as in the MUTE button, except of course for the language learner trying to understand.

To be sure, for the inveterate language learner, the learning never stops, whether crazy game shows or even crazier ads.

* Of course it’s never nice to see someone lose money on television, even if it does help my education. So far, schadenfreude doesn’t seem to be in the Spanish vocabulario.

“If I do not complain it is because a knight-errant must never complain of his wounds, though his bowels were dropping out through them.” – Don Quixote, Miguel de Cervantes Saavedra, pg. 43 Wordsworth Classics, 1993.

I have worked as a writer, computational analyst, project manager, physicist, and lecturer during a 30-year career. I recently published the general trade book Do The Math! On Growth, Greed, and Strategic Thinking (Sage, 2012), aimed at improving general numeracy, and The House of Words (Tuttle House, 2013), a literary thriller starring New York Scrabble champ Suzy Q. I recently moved to Spain and started this Caracolas blog to record some of my experiences.
View all posts by johnkwhi →
This entry was posted in Spain and tagged funny, grammar. Bookmark the permalink.