Where English meets Spanish: Las tiendas and on the telly

For the language learner, I think that the order is eye, mouth, and then ear, that is, we learn first to read a word, say it, and finally hear it (and hopefully understand it), firstly on its own (which is rare in spoken language) and then in a sentence. Hearing is the hardest, and marks the learner as one who is beginning to understand.

So, to start the eye on the journey, I have taken some pictures of stores (tiendas) in Gijón that have English or part English names, to see how much English has crept into everyday life here and to help again with the general vocabulario. Rest assured that the Spanish needn’t worry as much as the French to protect their language, given that Spanish is the second language of the world behind Chinese*, and certainly not as much the French in Canada (les Québécois), whose Orwellian sounding Bill 101** outlaws English-only signs to help keep the loup at the door. 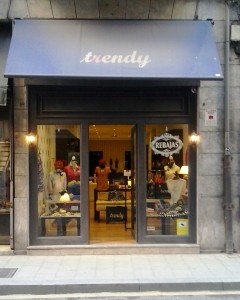 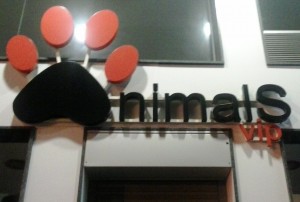 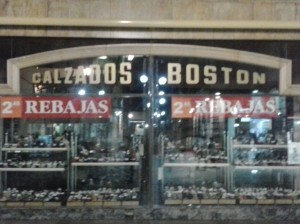 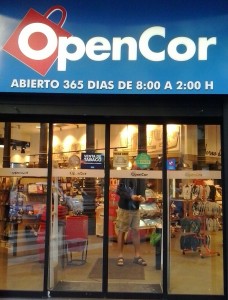 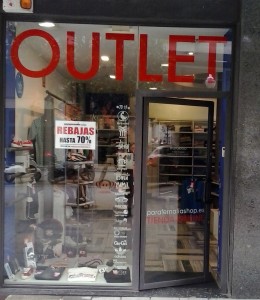 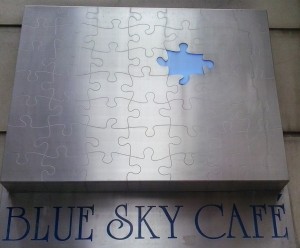 I’m not sure why Trendy couldn’t have been called (De) Moda or what Twin has to do with zapatos, but it could mean shoes for infants and kids (infantiles y juveniles) or that all shoes come in pairs (parejas).

Note that you will find the word REBAJAS on many shop windows in Spain meaning ‘reductions’ or ‘rebate,’ essentially SALE. In Asturias, you will also see REBAXES, the Asturiano equivalent. Alas, I don’t know why Animales wouldn’t do for a vet clinic (paw or pata included) but obviously Laboratorio de Vision is a mouthful.

And I don’t know what Boston has to do with calzados (shoes, boots, sandals, anything that goes on the feet), what OpenCor means (although it is Open every day), though Outlet gets right to the heart of selling. I guess Concesionario just doesn’t have the same draw.

Blue Sky Café (cielo azul) is a café bar in the centre of town where coming soon (starting October 11 from 9:15 to 11:30 pm) is the weekly Blue Sky Quiz. Check out the Blue Sky Café facebook page for details. Calling all quizzers. Be ready.

Our television channel 3 is also called Tienda, which as far as I can tell is a 24/7 anuncio for PestReject (promoción válida hasta 31 de marza 2014) and The XHose (Ocupa poco espacio, Muy manejable, y Fácil de guardar). When you’re learning a language sometimes los anuncios are better than las películas. At least, they speak slowly, clearly, and repeat themselves over and over (and over). Más rápido, operadores están esperando. But, fortunately, most shows have subtítulos, allowing the eye to learn first what the ear then tries best to catch up to.

Oh yeah, beware the DESDE on the real tiendas; you know, that famous UP TO lettering so small that it can’t be read even with the best of laboratorios de vision. Caveat emptor.

* Language rankings. Check out David Brown’s “Top 100 Languages by Population” for a full list plus sources. Note, French is thirteenth with 72 million speakers.

Grammar ASIDE (Abbreviations and acronyms) In Spanish, plural abbreviations are doubled. Hence, the United States is EEUU (or EE. UU.) for Estados Unidos. The United Kingdom (singular), however, is RU (or R.U.) for Reino Unido. Some common national acronyms are RENFE (Red Nacional de los Ferrocarriles Españoles) and FEVE (Ferrocarriles Españoles de Vía Estrecha), the two public train systems or ferrocarriles (literally ironways). Note that RENFE is the European wide-gauge standard used mostly throughout Spain now, whereas FEVE is the narrow gauge still found in the north.

EM is Empresa Municipal and SA is Sociedad Anónima, which is a type of company (SL is a limited company), and is used for city companies. For example, EMA is Empresa Municipal Agua. In Gijon, EMTUSA is Empresa Municipal de Transportes Urbanos de Gijón, the city bus system (which one can call to get the time of the next bus) and EMULSA is Empresa Municipal de Servicios de Medio Ambiente Urbano, the city recycling (which is community based, with large brown, yellow, blue, and green bins every kilometre or so for household recycling). I’m not sure what the L is for; maybe limpiar (to clean). Note, latas is cans and briks is short for Tetra Brik or Tetra Pak, the iconic rectangular drink container package.

I have worked as a writer, computational analyst, project manager, physicist, and lecturer during a 30-year career. I recently published the general trade book Do The Math! On Growth, Greed, and Strategic Thinking (Sage, 2012), aimed at improving general numeracy, and The House of Words (Tuttle House, 2013), a literary thriller starring New York Scrabble champ Suzy Q. I recently moved to Spain and started this Caracolas blog to record some of my experiences.
View all posts by johnkwhi →
This entry was posted in Spain and tagged funny, Gijón, language. Bookmark the permalink.

3 Responses to Where English meets Spanish: Las tiendas and on the telly