If you’re looking for a summer trip to knock your socks off, look no further than northern Spain – all the down-home charms of yesterday with all the modern conveniences of today. I recommend two, both by car starting and ending in Gijón, Asturias, the geographical centre of northern Spain. Trip 1 is “The Northwest,” taking in the coastal beauty of Asturias, Galicia, northern Portugal, and the western edge of Castille and León, returning along the heights of the breathtaking Douro/Duero valley and Zamora. Trip 2 is the “The Northeast” in a later Caracola. 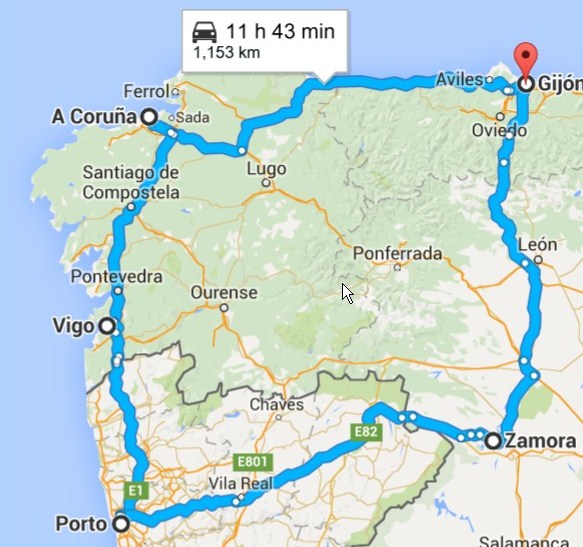 Along the way, I will itemize suggested stop-offs and recommend hotels, restaurants, and points of interest. Total driving distance along the scenic and open north-western autopistas: 1,150 km (Autovía del Cantábrico (A8), Autopista del Atlántico (AP-9), E1, A4, and Ruta de la Plata (A66)). Total travel time: how much time have you got?

Part I A Coruña (from Gijón)

Our first leg, we drove west to A Coruña from Gijón, stopping along the way in the idyllic Asturian fishing village of Luarca and at the Galician border between Figueras and Ribadeo. We had the bright idea to take a picture every ten minutes and put the snaps together in a sped-up movie (about 1,000 for our planned 10-day journey), although we wisely discarded the plan after the first day – we would have needed a camera in our head to keep up. Here are a few though, along the Cantabrican coast to the perfect paradise that is Santa Cruz de Oleiros on the outskirts of A Coruña. Paradise Found should be so easy. 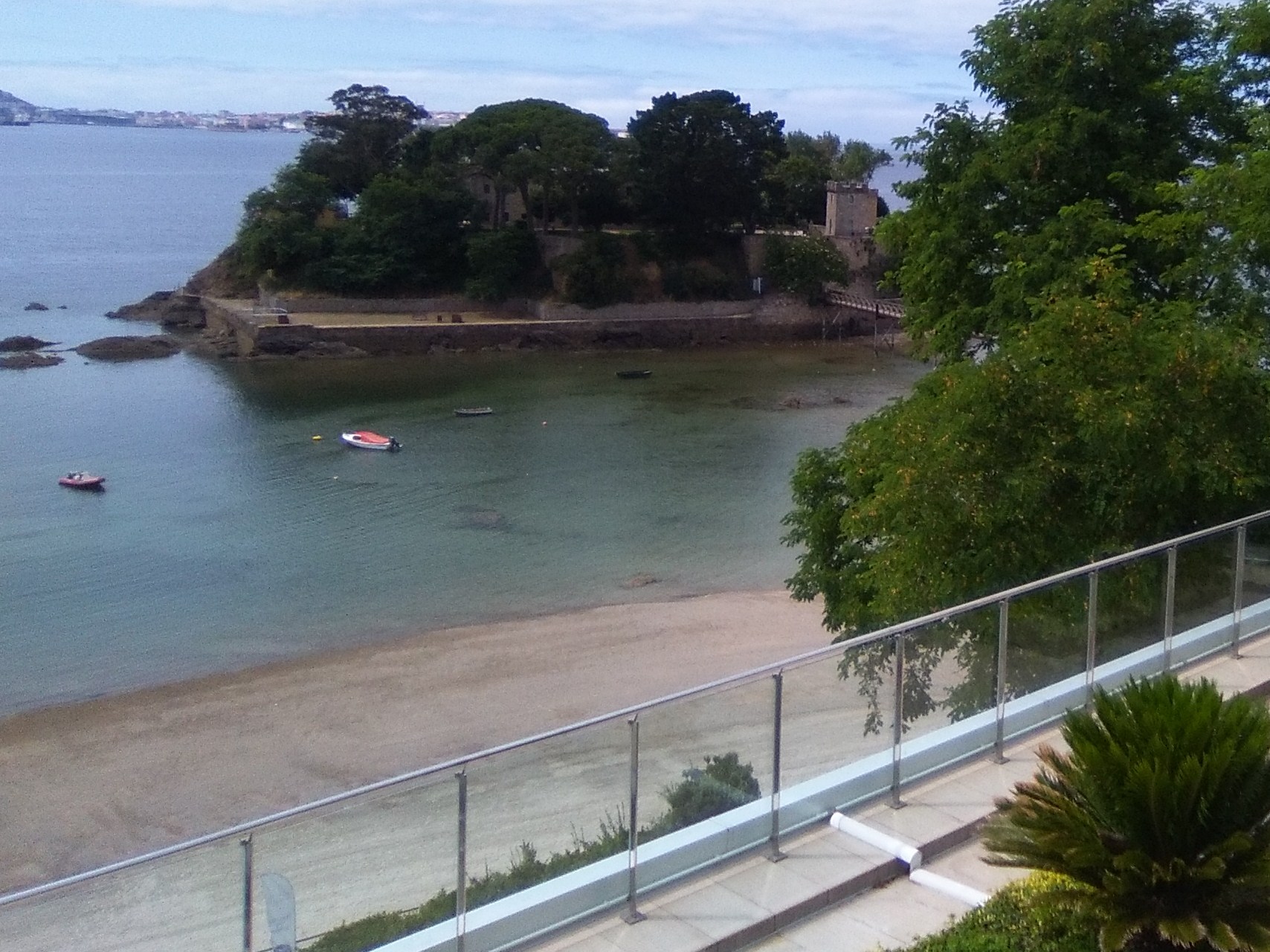 Staying: Hotel Portocobo. The hotel overlooks an exquisite cove in Santa Cruz on the outskirts of A Coruña. You won’t want to leave this tranquil paradise on the edge of the Atlantic.

Recommended sights: Sun, sand, and salpicon. A day-trip into A Coruña to walk the streets of the old town. Don’t miss the Sargadelos pottery outlet on Rúa Real, the main pedestrian street. A little further up the coast is La Torre de Hércules, the oldest Roman lighthouse still in use today.

Notes: A Coruña is a bit industrial by the port so stick to the old town. Or just relax in the peaceful solitude of an almost secluded beach. No need to think about anything.

Part 2 Vigo (from A Coruña)

If you’ve seen Los lunes al sol (Mondays in the Sun), the 2002 movie starring a grumpy and bearded Javier Bardem about the effects of unemployment in the shipyards of Vigo, you might not think Vigo was worth a visit (see the trailer and a few scenes: La Farola and On the Rocks). Not so. On a sunny day, there is no better place to mess around on boats and watch the world go by. Or amble the streets of this charming and easily walkable, French styled city on a hill.

Stop-offs: Santiago de Compestela (see El Camino de Santiago and The House of Words: Finding our pasts together in a previous Caracola for more).

Staying: Hotel Sercotel Bahia de Vigo. The hotel overlooks the entire bay from in front of the hillside pedestrian old part of town. Make sure to get a room as high up as possible (there are 14 floors). You can see clear across the bay to Moaña and as far as Las Islas (after which There Be Monsters).

Recommended sights: Just hang out in the Plaza de la Constitución (up the hill a bit) for a pincho and a clara (beer with lemon juice) or two. There are dozens of places to eat, including the touristy Calle de las Ostras (literally Oyster Street). I recommend the family-run O Portón at the north end of Oyster Street, where you can buy your oysters elsewhere and eat them there. Good prices, great food.

Boat trips to Las Islas are popular, full of sea-swept beaches and coastal walks, and depart every half hour from the dock across from the hotel. Try the nearer Moaña for a shorter trip, departing from the same dock for about €5 return. Sit back and chill.

Notes: Bring your walking shoes to venture even further up the hill as far as the castle.

I know Porto is in Portugal, but is too beautiful too pass up on a trip around north-western Spain (and the new Porto goalkeeper is former Spanish team captain Iker Casillas). Porto (or Oporto in Spanish) is on the Douro river and is the birthplace of Henry the Navigator, who essentially started the modern world as we know it, after he sought out the Moors on an excursion to Ceuta in northern Africa, and in the process discovered the west coast of Africa for future European explorers (Bartolomeu Dias rounded the Cape of Good Hope in 1488 and Vasco da Gama reached Calicut, India, in 1498).

Porto and its partner city Gaia (directly across the Douro) gives us the derived name for modern Portugal as well as the famous fortified wine, port, which the British brought home by the boatload. You can visit the still vibrant warehouses and muck about for hours along the Ribeira in this beautiful riverside chasm.

For the more adventurous, there are week-long boat cruises up the Douro as far as the Spanish border and beyond (where the Rio Douro becomes El Duero). We took a delightful one-hour, six-bridge Porto cruise as part of a hop-on hop-off package deal (bus, boat, and warehouse for €19). The bridges are awe-inspiring, one of which is built entirely in steel by Gustave Eiffel prior to his iconic Paris tower, and no doubt where he got some of his ideas.

Stop-offs: Viana do Castelo. It’s a bit off-road, but has an old-world beauty you don’t see in modern Europe.

Staying: We splurged on a boutique hotel in the Ribeira, Descobertas, which allowed us easy access to the riverside. It saves on the legs and the commute time to Action Centre. And no queues for breakfast, which featured a scrumptious croissant, cream cheese, peach creation.

Recommended sights: Everything, but be sure to take in a boat cruise and hang out along the Ribeira. There are tons of tourists and restaurants, so if you prefer to recline off the main beat, try a balcony restaurant. We loved Dom Tonho and its dreamy romantic setting to eat, sit back, and enjoy. We had the Salada de Atun con Feijao and Bacalahau Grehlado with house wine, which the waitress kindly served as a split meal for two. Muito bem!

Above the Ribeira, be sure to see the train station in the city centre with its exquisite tiled interior. The Majestic Café is where Jo Rowling did her thinking as she wrote the first chapters of her blockbuster Harry Potter books.

Notes: Porto is the second-largest city in Portugal, with a population of 1.5 million, but a ring road takes you in and out with ease. Obrigado/a is thanks and “nh” is an ñ (énye), so España is Espanha.

This is the longest part of the journey, through the interior of northern Portugal with stunning views from the mountain tops above the Douro valley. The almost empty A4 takes you south of Vila Real to Bragança, essentially at the Portuguese-Spanish border. From there, depending on time, you can pick up the Douro or travel straight on to Zamora (alas via national roads instead of autopistas).

Zamora is a treat, an old walled city on a hill with castle, cathedral, and endless narrow streets. The main pedestrian walk goes on forever and fills the soul as you amble through the ages. If you bring your camera, you can’t stop taking pictures. 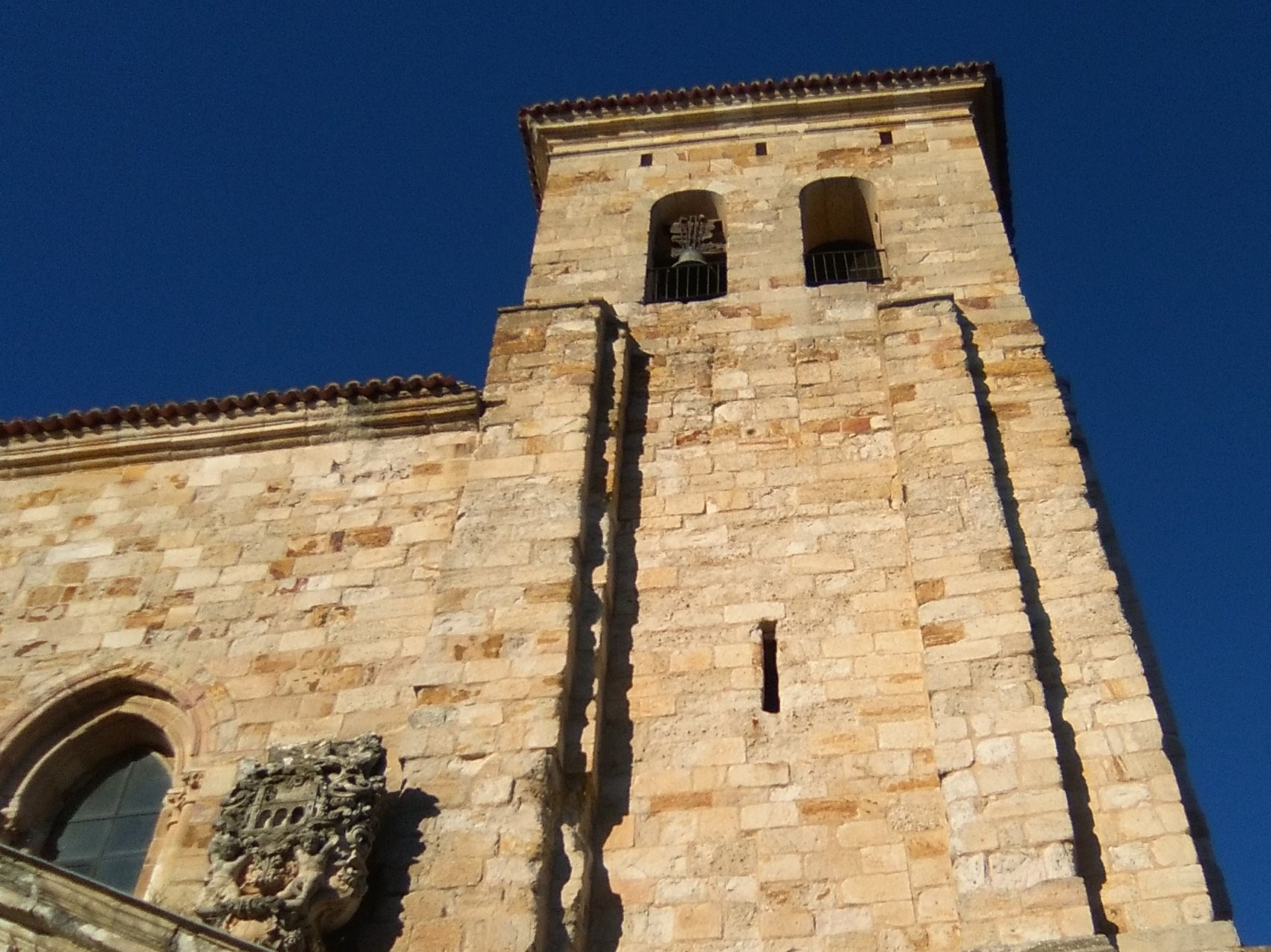 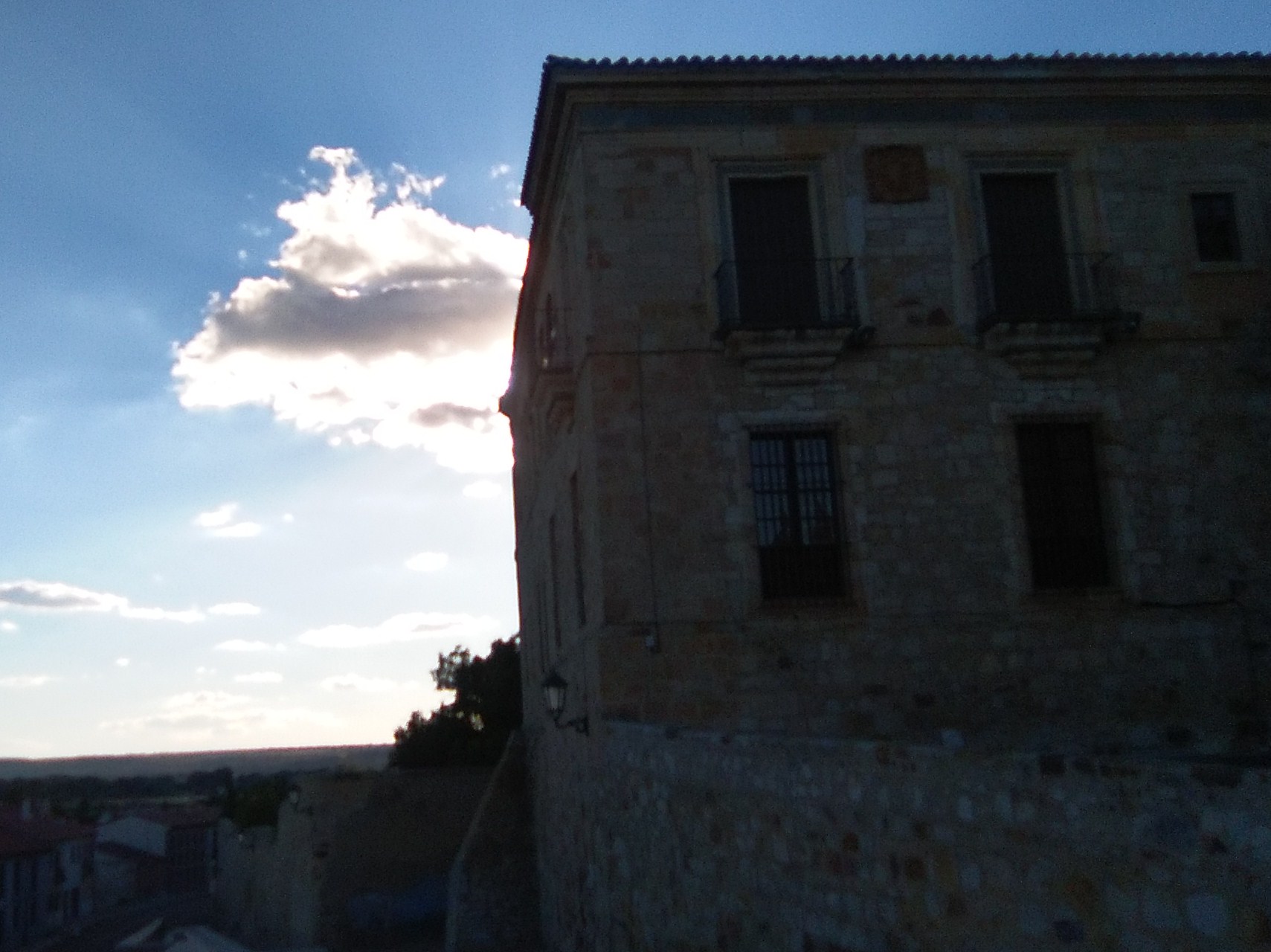 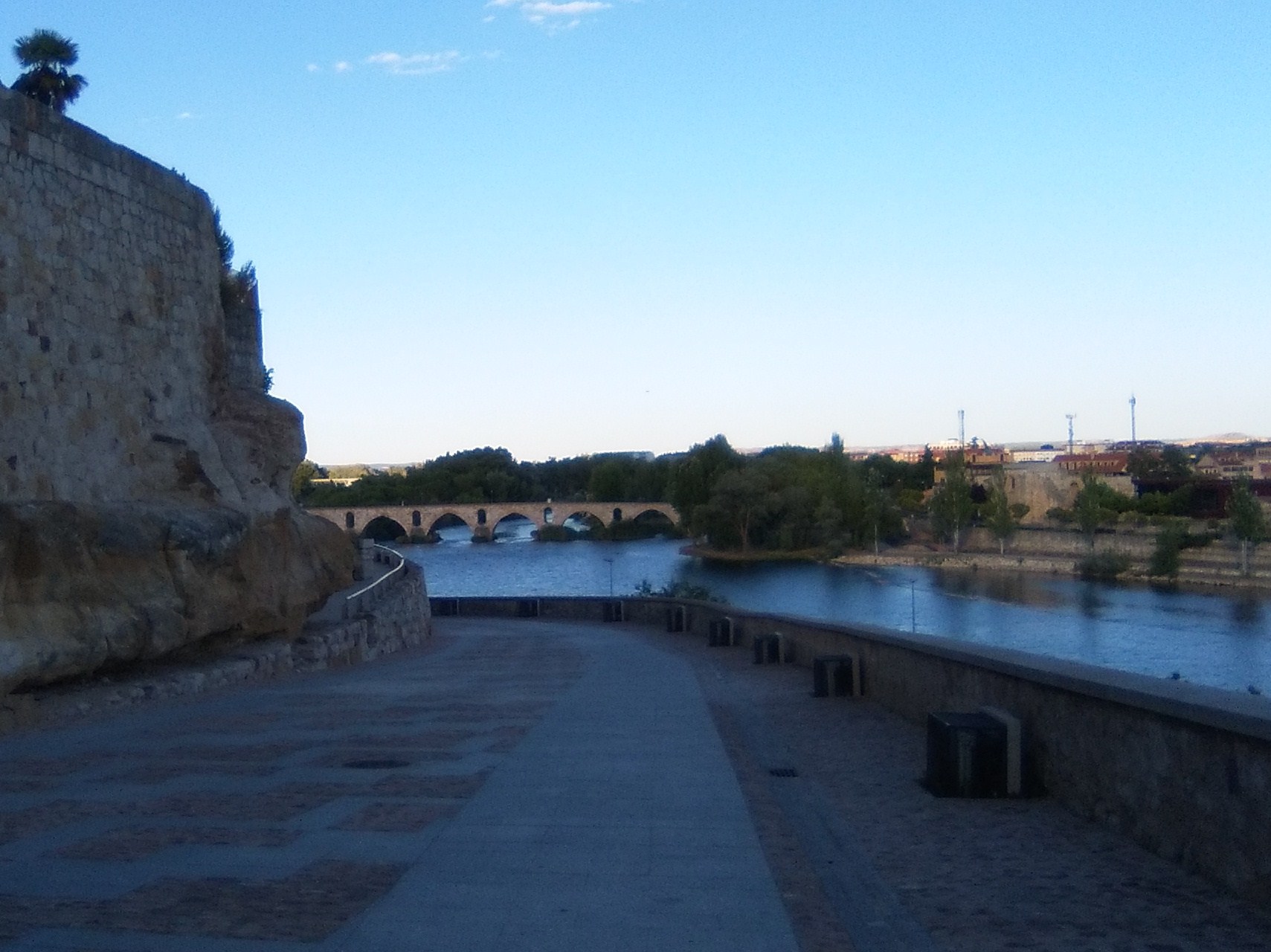 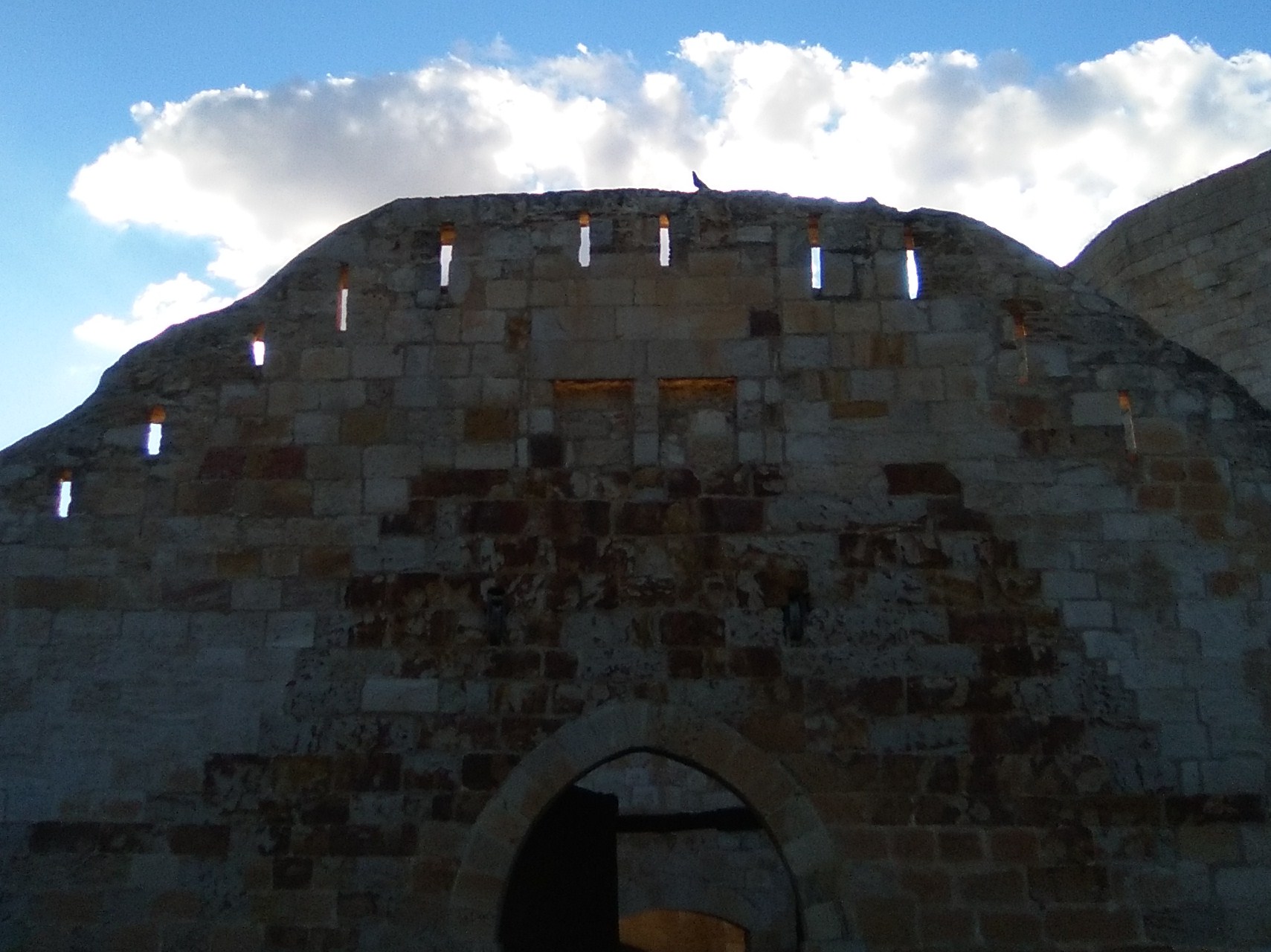 Stop-offs: Hard to stop on this leg, but we went for a meal in the sleepiest of towns, Bragança. Check out the historic part of town and the Restaurante Poças.

Staying: NH Zamora Palacio del Duero on the river and a short walk to the Plaza Mayor. €66 for everything you could want in a hotel.

Recommended sights: Find the main pedestrian street and start walking. Be sure to stop in the latest Parador hotel for a good look round, built on the sight of an old Muslim citadel. Better yet, stay there if you can afford it (twice the price of the Palacio).

Notes: Zamora has the most number of Romanesque churches in Europe.

Up Next: “The Northeast” from Gijón to Bilbao, San Sebastián, Pamplona, and Logroño.

I have worked as a writer, computational analyst, project manager, physicist, and lecturer during a 30-year career. I recently published the general trade book Do The Math! On Growth, Greed, and Strategic Thinking (Sage, 2012), aimed at improving general numeracy, and The House of Words (Tuttle House, 2013), a literary thriller starring New York Scrabble champ Suzy Q. I recently moved to Spain and started this Caracolas blog to record some of my experiences.
View all posts by johnkwhi →
This entry was posted in Spain and tagged Asturias, food, northern Spain, tourism. Bookmark the permalink.