Frixuelo is the Asturian word for crêpe or thin pancake (tortita), and so today being 40 days before the first Sunday after the first full moon after the spring equinox, I made frixuelos for breakfast for Belén and me. Asturians are rightly proud of their culinary delight and I have been lucky to have had a few already at the As de Picas restaurant in Gijón and at our regular Sunday family meal, courtesy of Belén’s sister Paz’s husband Avelino (cuñado). It may be hard to give up for Lent. 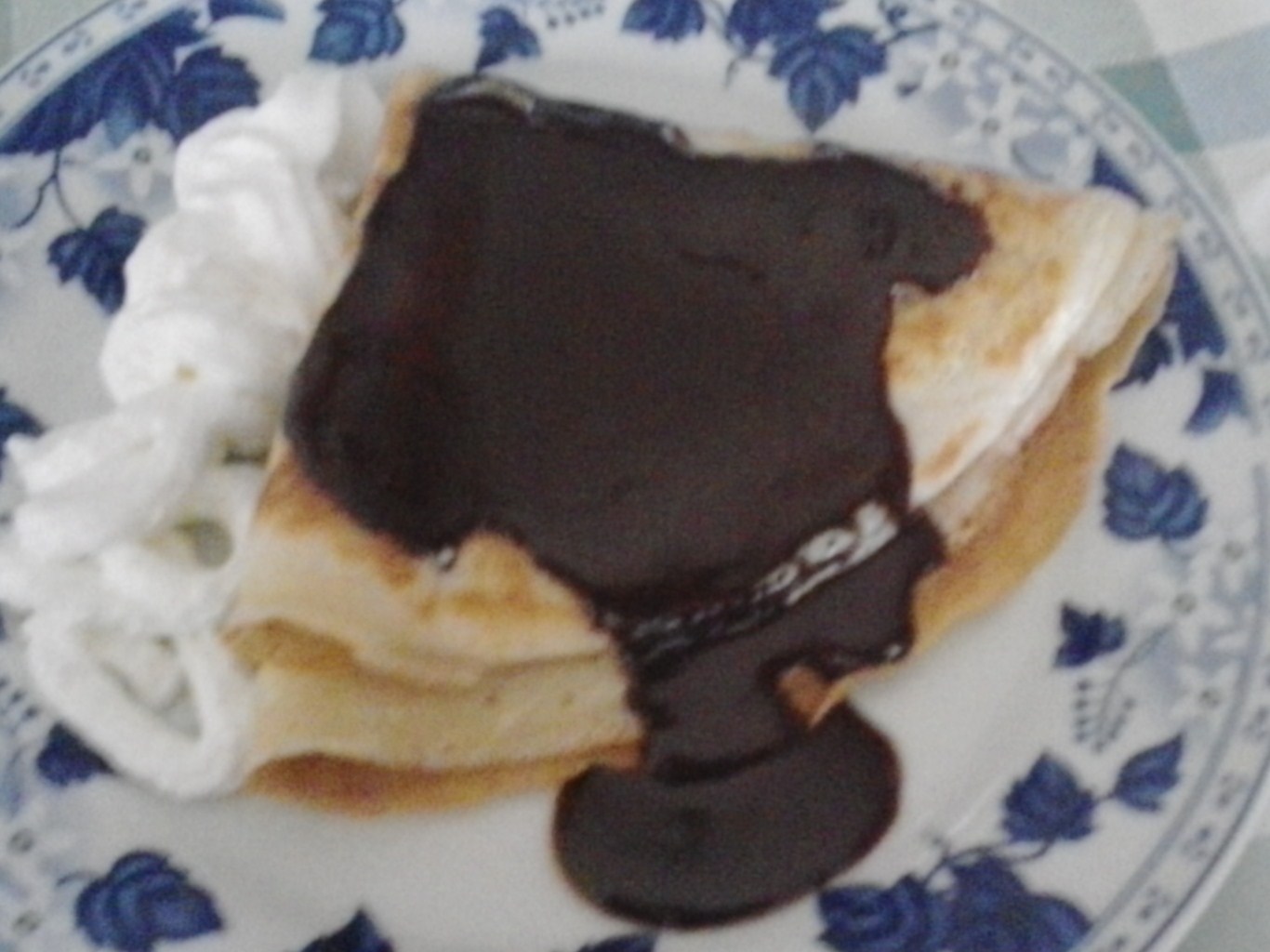 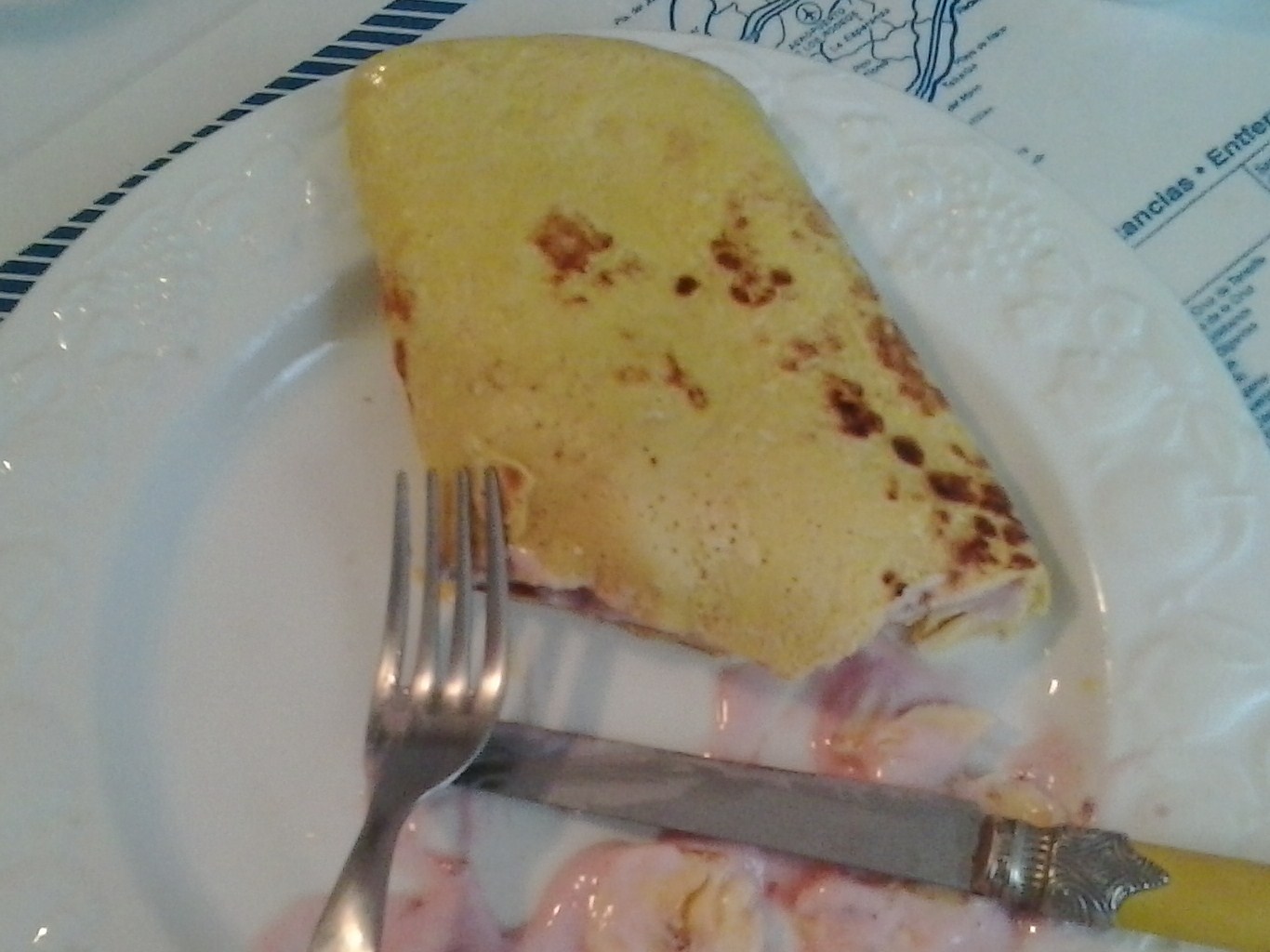 Lent is that holiday in Western Protestant tradition where we give up things (probably because of the Puritan influence on early American life). We give thanks at Thanksgiving but don’t party like its 1999 at Carnival like the Catholic Spanish and Portuguese world does. At Carnival or Mardi Gras (literally fat Tuesday), where perhaps following the Jewish tradition of “sealing up” the leaven at Passover, we eat all the household fat in one big binge and then repent until the Easter Rising (an altogether different rising in Ireland, the land of puns and literary turns of phrase).

So what will I give up? I can’t give up chocolate, it’s too much a part of our lives. Belén and I have both happily inherited a chocolate addiction from our mothers. I think I could give up chocolate if it wasn’t always in the house, but there’s the rub—it always is. And if it’s there, I’ll gobble. Abstinence in this case does not make the heart grow fonder. Alas, I can’t deny Belén. She organizes our weekly shopping around which place has the best chocolate – Lidl hands down.

No, I have decided to give up swearing for a month (well for 40 days until the Rising). I really do swear too much, although in my defence I swear only at inanimate objects (e.g., computers and cars that cut in front of me). All I want from a computer is repetition, but when it doesn’t do what it did the last time, the time before, and every bloody time before that, the colourful excuse-my-French comes out. I’m sure more than one neighbour has wondered about my sanity. As for the cutting-in-front-of-me cars, what’s your fuckin’ hurry? Get a life. You sit on top of one of the pinnacles of Western civilization (and its downfall but that’s another story). You’ll get there faster than your grandfather, I assure you, so chill. Eat some chocolate.

And, sadly, I have decided to give up writing a regular Caracola. Not too many people are reading it anyway, well, not according to the number of comments or lack thereof. Not that it’s about numbers in a Benedict versus Francis way, but I had hoped for more of a discussion, some of YOUR thoughts. Thanks to Craig, Isabel, Maribel, Elena B, Terri, and the four obvious link lovers for your comments so far. No thanks to the 6,299 other Spam machine comments. Come on “Nice read, I just passed this onto a friend who was doing a little research on that topic. And he just bought me lunch since I found it for him and it made him smile. So let me rephrase that: Thank you for lunch!”* with a link to a whiskey company. What the f*?k?

Happily, I now understood that a blog is a diary, so it doesn’t matter. I’m not going to change the world with my posts, but this particular work in progress (me!) is progressing. I reread my own posts to remember where I was and how I learned and who I met along the way. I also understand Eamon Ryan’s comment more intimately now about half of all blogs are read only by the writer. Yeah, it’s a diary. And as I wrote in Do The Math!, contrary to the great Levitt and Dubner in their fascinating Freakonomics, more writers make less criminals. Write on! In fairness I have been busy writing CounterPunch articles too, which thankfully are being read.

One thing I have learned is how much I haven’t missed my own culture. Maybe that’s a function of age. Maybe it’s because I have access to regular English and English-language culture, what with the Internet, the New York Times, my regular Skypes home to my mother, and the biweekly quiz at the Blue Sky Café quiz. But also, my Spanish is improving. We saw our first Spanish movie together with no subtitles, the charming and funny Living is Easy with Eyes Closed (Vivir es Fácile con Los Ojos Cerrados), which took home the Goya for Best Picture. I don’t know if it merited Best, since I haven’t seen enough Spanish cinema, but it was good, even if [*** Spoiler alert ***] the girl didn’t get the guy in the end. In Hollywood, the girl always gets the guy, even if she was – in a frankly misogynist way Mr. Trueba – the only character whose eyes didn’t get opened.

But I also don’t miss the Oscars (now that’s a real fix-uelo), late-night talk show irony (are than any other kind?), rush hour, Guinness, snow, … I don’t even miss baseball, having agreed to help out with a local team here, though with the rain I haven’t made it out so far.

So, fewer Caracolas, and perhaps more diary entries for me. I can happily write about the steel business, a trip to the mining museum, the best restaurants. Tell you what, if you request it I will. Otherwise, I am happy as a frixuelo doing my own thing. And to you, dear, gentle reader, Happy Frixuelos Day, Fat Tuesday, Mardi Gras. Hopefully, we’ll all be better for the rising.

* Edited slightly for clarity, because, well, a machine wrote it.