From Salpicon to Spam and back

I first discovered the amazing salpicón (salpicon in English) on a trip to A Coruña last summer with Belén, tucked away in an odd restaurant in the city centre on an even odder menú del día. I can’t speak for the salpicón, but for me it was love at first eat. A few more menú del días back in Gijón and then again last Sunday courtesy of Belén’s sister Paz and I became hooked. Otra aventura española de amor por la comida. 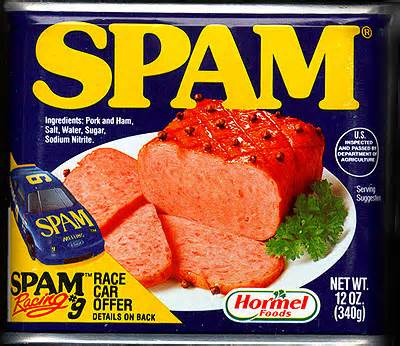 Salpicon is a delicious mix of seafood – shrimps, mussels, clams – together with chopped onion, tomato, pepper, and a few twists of lemon. Think tabbouleh* with seafood instead of bulgar. If you like, a fancy word for seafood salad. Leave it to the Spanish to come up with an exotic word for salad.

It’s more popular in the Hispanic world, especially Central America and Mexico, brought by the Spanish colonists. I have no idea of the origin of the word, although it likely comes from the Spanish verb salpicar, meaning to sprinkle. And like any transplanted dish it has many variants, typically de marisco in Spain but also with fish and beef elsewhere.

Maybe it was a transplanted dish itself, brought with the Arabs who lived and ruled here in varying degrees from 711 to 1492 (Moorish Spain in Al-Andalus or Andalusia). They brought sugar, rice, lemons and increased the use of olives, foods mostly associated now with Spain. According to Alan Davidson in The Oxford Companion to Food:

Introductions by the Arabs were … of fundamental importance to Spain’s future. They are particularly associated with the use of almonds (the essential ingredient for so many Spanish desserts, baked goods, and confectionery items); with the introduction of citrus fruit including the lemon and the bitter (Seville) orange…sugar cane and the process of refining sugar from its juice; many vegetables, among which the aubergine (eggplant) was outstanding; and numerous spices such as cinnamon, nutmeg, sesame, coriander, aniseed, etc. The Arabs introduced rice to the tidal flatlands of what is now Valencia …The use of saffron in paella is also something which stems from an Arab introduction.

Other sources call salpicon a medley, a melange, a hodge podge. I know what a medley and melange are, I even occasionally use hodge podge in day-to-day life (last round at the quiz was called hodge podge), but the origin of salpicon, I don’t know. Alas whatever it means, however it’s served, and regardless its origin, it is delicious.**

I’m a mixture, a melange, a big jambalaya of cultures myself (my favourite Cayjun or Creole food, itself a rich mix of French, Spanish, Portuguese, and Italian). I’m three quarters Irish, one quarter Scottish, four quarters Canadian, with maybe a pizca of Asturian cider now. Interesting that the races, which were separated millennia ago, are again reuniting, courtesy of the Industrial Revolution and mass immigrations from poor country to rich. From the blackest of Africa spread apart and mutated by climates over the hundreds of thousands of years (no need for black skin in Sweden) we’re mixing again. Human pea soup.

I suppose Spain is changing too, although it is pretty white. The mix is mostly in the food not the people, with the best and most varied thrown together in foods like paella and salpicon. Spain has its own rugged past with cultural dissent, a cipher anyway for poverty, but no need to dredge up Torquemada and the Reconquista in a caracola on food. Suffice it to say, we all have to learn to mix. Variety is the spice of life. The salsa is the sauce.

Spam on the other hand is something we could all do without, spam as in the incessant commercial messaging that comes with modern technology. The other spam, well, that’s not nice either, an inexpensive (cheap) mix of chopped pork shoulder, ham, potato starch, and sodium nitrate, with a gooey glazed jelly that comes from the cooling of the meat stock. It was popularized after the Second World War by servicemen and women and soon became popular the world over because of its low (cheap) cost.

But most of today’s spam comes via email (85% of all email), Twitter (perhaps one third), even the latest high-tech home appliance which gurgles out ads for our presumed benefit in the midst of slicing and dicing. Essentially, if it’s got a microchip, it can spam (see Finn Brunton’s excellent A Short History of Spam for more on the origins of spam).

It’s not enough that they can stick carbon-unfriendly leaflets in your door, program a robot to telephone you at all hours, they litter your computer selling junk, 24-7, holidays included. No, I’m not interested in collecting my Nigerian inheritance, finding out about government fraud (believe me I already know), or availing of the latest no-strings-attached, no-money-down, don’t-pay-a-cent-until-2054 options on my fibre package. Please, leave me in peace. Don’t you know, I’m enjoying my own amazing can’t-live-without-mix, salpicon.

* Not to confuse one little known dish for another: Tabbouleh is a Middle Eastern salad made from bulgur, tomatoes, cucumbers, finely chopped parsley, mint, onion, and garlic and seasoned with olive oil, and lemon juice. I have been eating it and falafel ever since my older sister took me to Moishe’s on Spadina Avenue 35 years ago.

** Some salpicon recipes at hogarutil.com and a Youtube video from Cocina Para Todas. Good for Spanish practice too.

I have worked as a writer, computational analyst, project manager, physicist, and lecturer during a 30-year career. I recently published the general trade book Do The Math! On Growth, Greed, and Strategic Thinking (Sage, 2012), aimed at improving general numeracy, and The House of Words (Tuttle House, 2013), a literary thriller starring New York Scrabble champ Suzy Q. I recently moved to Spain and started this Caracolas blog to record some of my experiences.
View all posts by johnkwhi →
This entry was posted in Spain and tagged food, funny. Bookmark the permalink.