Espere … Ctrl-Alt-Supr only as a last resort

Living in a new country is daunting. Living in a new country with expat language skills can be terrifying. Insanity soon prevails, from opening a bank account (8 separate signed pages needed) to signing on at the local police station (a requirement of any extranjero whether criminal or not).* It may take a while, but “Don’t worry, be happy” is the best policy. In Spanish, no te preocupes. Chill. 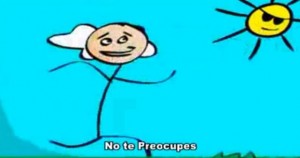 Try translating Windows commands from Spanish to English. A Nightmare on Elm Street. Figuring out why your mobile phone suddenly won’t access the internet. Rosemary’s Baby. Finding the best Wi-Fi (Wee-Fee) hot spot in the house. The Exorcist, The Shining, Omen, Parts I, II, and III. When it comes to computers, practice does not make perfect.

The first Spanish computerese I mastered was descargar and cargar or download and load. I had to – necessity being the mother of invention and all – and have been descargaring everything under the sun. Even our television routinely descargars under the guise of the latest update. Contraseña (or clave) is also essential if one wants to sign on to anything with a password. But most vexing is the @ sign, a third-level function located on the 2/” key, accessed by pressing Alt Gr + 2. Not to mention accents. I thought French keyboards were hard. Spanish is another level.

Cookies are also a pain. Not the galleta kind, the pain-in-the-culo kind, as in a web page recognizing an IP address as Spanish, and then automatically assuming you speak business Spanish. As such, when I use the web, my IP recognizing cookie machine sets me up to open a BBVA account, watch TVE, learn English (curso official de inglés a distancia), or descubre nuestra bodegas. I don’t want to do any of that even in English. Yo no acepto.

Spanish learning aids and resources ASIDE: Coffee Break Spanish is an excellent resource for improving Spanish with lots of free audio exercises (210 and counting over four years). Where is Asturias is an excellent website and facebook page about life in the north of Spain. Check out Terri Mitchell’s country house Fancornio Rural for interesting courses and pastoral accommodation. Blue Sky Café has a Tandem Language Exchange, where English and Spanish are traded in comfy café confines. And if you’ve ever wondered if multilingualism is good for your health, check out Bilinguals Have Higher Level Of Mental Flexibility in The Huffington Post, Sept 12, 2013.

* I still have the government-issue tissue the local government admin lady gave me to wipe my finger after I had been inked. It seems bureaucracy is the norm in Spain. Some even blame the fall of the Spanish empire on a preoccupation for detail and losing site of the forest for the trees (and thus the colonies).

** The Huffington Post is slowly taking over the world with on-line editions in Canada, Germany, Spain, France, Italy, Japan, Maghreb (North-west Africa), the U.K., and the U.S. Good for language learners, not so good for diverse, pluralistic thinking.

I have worked as a writer, computational analyst, project manager, physicist, and lecturer during a 30-year career. I recently published the general trade book Do The Math! On Growth, Greed, and Strategic Thinking (Sage, 2012), aimed at improving general numeracy, and The House of Words (Tuttle House, 2013), a literary thriller starring New York Scrabble champ Suzy Q. I recently moved to Spain and started this Caracolas blog to record some of my experiences.
View all posts by johnkwhi →
This entry was posted in Spain and tagged funny, language. Bookmark the permalink.