In Asturias, cider (or sidra) is a way of life. There are 22 officially designated apple varieties which can be pressed into almost 100 different brands made by small farmers and larger empresas alike. I can’t say I’ve had every one yet, but I have tried a few.* In Ireland, Guinness is a food group; in Asturias, it’s the sidra.

Wherever Asturians gather, you’ll find sidra and sidrerías, from Gijón (the largest city) to Oviedo (the capital) to every town and village along the coast or south to the Picos Europas and the Castilla y León border. Gijón even boasts its own Guinness record for the most people simultaneously pouring cider. By pouring I mean from a height, arm raised high, glass held low to get the best possible agitated froth (aguante). The Asturian cider pour is essential and has its own verb to describe the procedure – escanciado.** 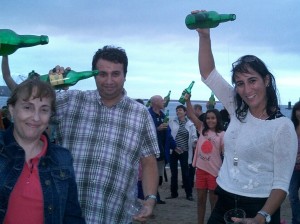 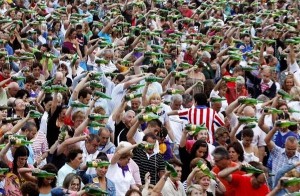 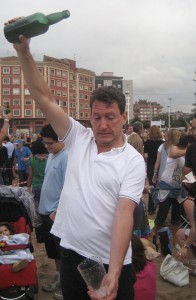 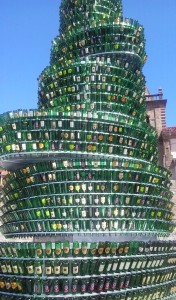 The current record from August, 2013, is 8,061 people, shared by sidra-loving Asturians in their annual group pour on La Playa de Poniente (one of the westernmost beaches of Gijón). In line with Asturian accounting, however, they stop recording newcomers soon after breaking the previous year’s record, so as not to elevate the numbers beyond reach for next year’s pour. It’s a group hug Asturian style. With practice, only about 10% ends up on the floor (or beach). 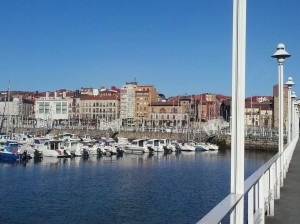 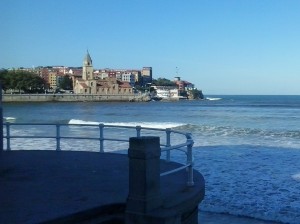 Of course, Gijón has more to offer than just fabulous apple-fermented juice. There is La Playa de San Lorenzo, one of the longest city beaches on the Spanish north coast with a 5-km walled promenade (el muro) that defines peace and tranquillity in the middle of its 250,000 strong city population. While not ablaze with excessive temperatures as in Spain’s Mediterranean Costa del Sol, San Lorenzo is home to the more refined sun-worshippers, walkers, and surfers alike.*** 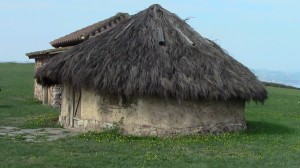 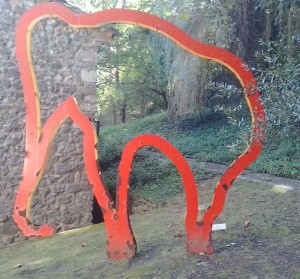 For the archeologically-minded, there is a Roman wall, Roman baths, thatched Asturian homes, and even a few 20,000 year-old cave drawings, only an hour’s drive up the coast to Llanes. One can also get to Bilbao or Santiago de Compostela easily by car along the Autovia del Cantábrico or as far as Bordeaux or Porto in a day.

Other must-sees include a walk through Cimavilla, the oldest part of town, and then up to Eduardo Chillida’s modernist Eulogy to the Horizon statue (El Cerro) with its sweeping views of the conchal Cantabrican coast. The Universidad Laboral, designed by Luis Moya Blanco, conjures up thoughts of another Spanish Escorial, and is the largest building in Spain by surface area.

To others, the outskirts or afueras is where Asturian charm best lies, in its coastal nooks and crannies, in its pastoral country sides, in its rural villages. But for most, the beauty of Asturias is in its people. You can walk the beaches, see historical sites, but all you have to do is share a sidra with a local and you’ll be hooked.

John K. White is an Irish-born Canadian writer now living in Gijón. He is the author of Do The Math!: On Growth, Greed, and Strategic Thinking (Sage, 2012), The House of Words (Tuttle House, 2013), and Caracolas, a blog about his ongoing adventures in Asturias.

** Asturians drink over 50 litres per person per year (possibly the highest consumption in the world). Excellent information about sidra is available at Sidra de Asturias and Ciders of Spain. There is also an excellent interactive Museo de la Sidra in Nava, where you can watch an apple being pressed, a cider bottle being corked, and even play the traditional Asturian bagpipes. El Museo de la Sidra defines cider as “both a beverage and a rite.” When you go, check out Casa Colo in nearby Ceceda for a meal.

*** Asturias and the Green Coast escaped the worst of the over-development madness along the south coast of Spain. Check out “Why the crisis could be good for nature,” Juana Viúdez, El País, August 9. 2013.

I have worked as a writer, computational analyst, project manager, physicist, and lecturer during a 30-year career. I recently published the general trade book Do The Math! On Growth, Greed, and Strategic Thinking (Sage, 2012), aimed at improving general numeracy, and The House of Words (Tuttle House, 2013), a literary thriller starring New York Scrabble champ Suzy Q. I recently moved to Spain and started this Caracolas blog to record some of my experiences.
View all posts by johnkwhi →
This entry was posted in Spain and tagged Asturias, food, Gijón, northern Spain. Bookmark the permalink.

7 Responses to Asturian Cider Stories and other Gijón Excursions