El menú (men-OOH) del día is a great way to eat in Spain. Primero, segundo, postre, con una botella de vino (typically, red or tinto), all for the crisis-busting price of €9 and up. Where I’m from, you can’t get a bottle of wine for €9, let alone a meal. Some are better than others, but here are a few from the calles of Gijón. 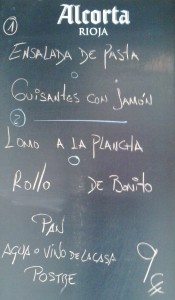 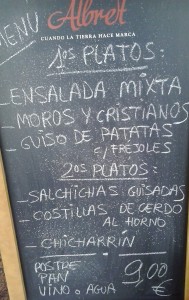 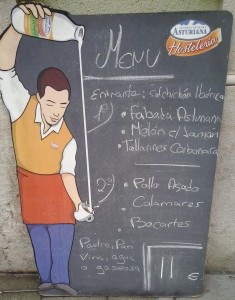 It’s impossible to explain Spanish food in words. Delicious, amazing, spectacular don’t do it. Transcendent comes close. La comida (especially of the Sunday family kind) is heaven to los españoles. Sit back, eat, drink, and enjoy – it’s slow food taken to its slowest. No talk of politics, economics, or sports, food is the only subject.

Note that a value-added consumption tax on all goods and services, IVA or Impuesto sobre el Valor Añadido, can be charged (although not in a listed menú del día). The maximum EU rate is 27% (only in Hungary). The standard rate in Spain is 21% (7% in the Canaries) with a reduced rate of 10% on food and drinks (3% or 0% in the Canaries). The Canaries are afforded special status “for the purpose of encouraging the economic and social development of the islands and the diversification of their manufacturing and service sectors.”*

The bread can also be excluded from the listed price, so you may be charged (one or two euros). El camerero sets it out, but doesn’t say if it’s included. If you eat, you’re charged, if not he takes it away gratis (I saw one camarero roll up the uneaten bread with the paper table cloth). And in the airport, they can slip you an aceite de olive and a tomate extra at 60 cents to sauce your bocadillo.

But rarely will you be ripped off, although it can happen.** I ordered a paella de marisco in the main tourist square in Madrid, La Plaza Mayor, and didn’t quite get what I asked for. Antonio was the very nice (amable) waiter, and the view of the square was unbeatable with various actors doing their usual bits for money, from the stone statues to the squealing babies to the gravity-defying fakirs sitting on ropes. (I have to say I don’t get the squealing baby bit if the idea is to attract paying people.)

Alas, the paella de marisco came with carne but no marisco. Antonio apologized, said he would see to it, and ten minutes later he brought out the same paella with a little less carne and some boiled gambas. He apologized again, and half an hour later another paella de marisco arrived. Fortunately I wasn’t too hungry when I first arrived. And, fortunately, he had left the bottle of wine on the table (although I had only asked for a glass) and it was a gorgeously sunny day to sit and rest one’s feet. Well, what do you expect from La Plaza Mayor?

I did learn a new word – engaño – and Antonio learned that one doesn’t have to pay what one is told to by overly nice, overly apologetic waiters on hastily scratched out cuentas. Que vamos hacer. Es la vida.

Here is a picture of real paella, the kind one melts over (thanks to los dos Charines y Avelino y Paz).***

** In Dublin, I had a one-inch piece of monkfish for €30 in The Shelbourne, a miniscule so-called pasta meal in Terra Madre for €25, and an £18 breakfast in a former Ballsbridge hotel (former because the owner went belly-up when the value of his multi-million-euro land was halved in the 2008 crisis). Easy come, easy go.