Renewable Energy in Spain: How the wind and the sun are changing our world

Everyone knows the windmills of La Mancha from Don Quixote and that the south of Spain is one of the sunniest and hottest parts of Europe, drawing record numbers of tourists each year. But did you know that Spain is a world leader in wind and solar power generation? Poised to make renewable energy a cornerstone of a revived economy, Spain now boasts wind as its number one power producer (20.9%) ahead of nuclear (20.8%) and hydro (14.4%). In fact, last year Spain was the first country ever to use wind as its primary energy source. That’s good news for sustainable energy and good news for the environment. 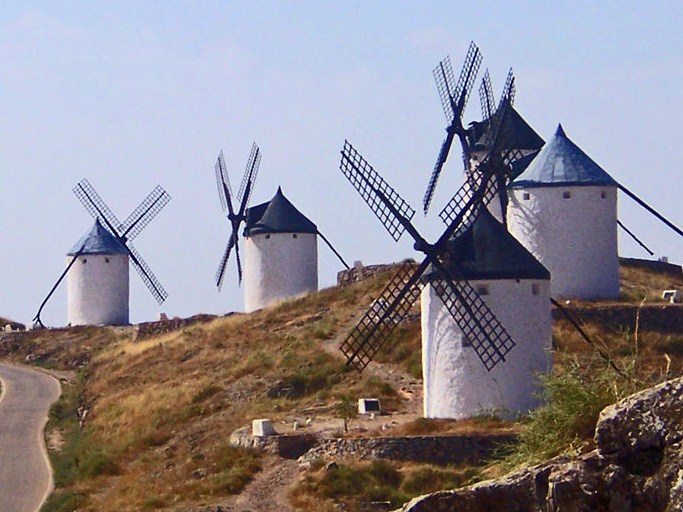 One advantage of renewable energies such as wind and sun is that they don’t depend on the availability of fossil fuels (oil and gas), which are dwindling resources and the cause of increased conflict around the world. Furthermore, the fuel is limitless with zero carbon emissions, allowing countries to reach their Kyoto Protocol commitments – as an EU member, Spain has targeted for a 20% reduction in emissions by 2020. What’s more, the energy is locally produced and easily scalable, not prone to the problems of one-size-fits-all mega projects.

For those unfamiliar with energy numbers, a single turbine generates about 2 MW and can power the electrical needs of about 600 homes. That’s almost 7 million homes that can be powered by a nationally generated 23 GW (or 23,000 MW) from about 11,500 wind turbines dotted across the Spanish countryside, enough to power all the homes in Madrid, Barcelona, and the whole of Andalucía combined (roughly, 16 million people).

Of course, at 250 tons and 100 m high each, with three carbon-fibre, 43-metre-long rotary blades, some say wind turbines detract from the natural landscape and are noisy, but compared to the pollution from oil, gas, and coal plants and the ongoing dangers of nuclear, one wonders if that’s a small price to pay to meet our modern energy demands. Increased efficiency in new turbines helps reduce the noise, while in Spain most wind farms are out of the way and in some places even enhance the landscape. One needs only drive through the hills of southern Galicia to Oporto on the newly built E1 highway to see the power and the beauty of the majestic white giants. Don Quixote would be proud.

They say that one hour of sun shining on the earth can power the world’s energy needs for a year.* In Spain, one thing is for certain – sun, where in the south it is sunny for 200 days of the year with temperatures ranging as high as 40 degrees in August. Indeed, Spain has sun and lots of it.

To make sun into electricity, there are two main technologies: solar cells (photovoltaics) and thermal (concentrated solar power), both of which are becoming more viable every year. In the 1960s, photovoltaics powered early communication satellites, while today they account for about 3% of total power generation in Europe (almost 8% in Italy). 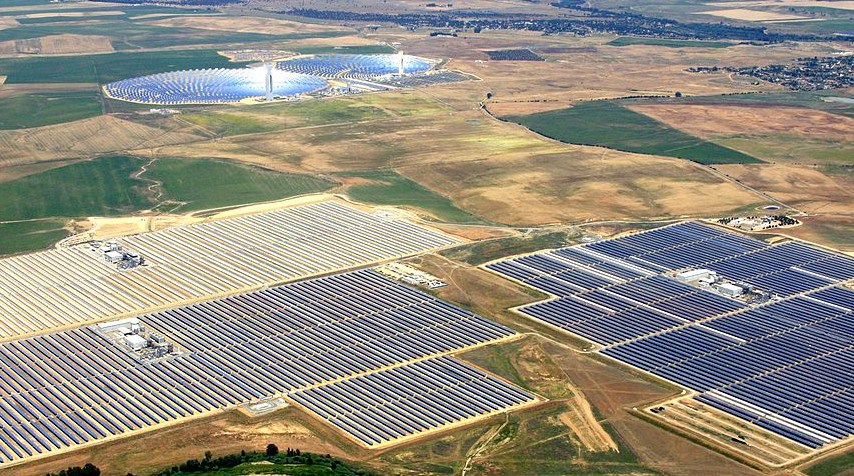 The science of turning sunlight into electricity is well known using doped silicon semiconductors that excite electrons to generate current, the opposite of turning electricity into light as in today’s ubiquitous LEDs, found in anything from television and computer screens to traffic lights. What’s more, the costs continue to decrease: in the 1970s, photovoltaics produced electricity at $30/watt while today’s best Chinese-made PV cells are down to $1.5/watt.

According to The Global Market for Photovoltaics 2014-2018, “Europe remains the world’s leading region in terms of cumulative installed PV capacity, with 81.5 GW as of 2013.” Despite a slow-down in the economy from 2008 and “dissuasive tariffs for grid connection,” Spain has the third largest installed capacity in Europe (5.3 GW) behind Germany (35.7 GW) and Italy (17.9 GW), and the sixth largest in the world at 3.8%. Total installed capacity in Europe was 11 GW in 2013 (only 120 MW in Spain) and is expected to continue growing although at reduced rates. Between 7 and 17 GW are expected to be added each year to the European grid.

Unfortunately, investment in solar has declined in Spain after the government halted subsidies in July, 2013, worried by an accumulated €30-billion tariff deficit since 2001. Short-sighted one might say given that “more than one million Germans have installed solar panels on their roofs enough to provide close to 50 percent of the nation’s power,” as noted by David Crane and Robert F. Kennedy Jr., in a 2012 New York Times article, primarily as the result of its 2000 renewable-energy law that promised guaranteed prices and priority access to power grids.

Concentrated solar power plants, however, are on the rise, especially in Spain, using either parabolic troughs or thousands of “heliostats” to focus the sun on a water tower to generate steam, which is then used as in a conventional plant to turn a turbine and create electricity. The working temperatures range from 250°C to 1,000°C. The parabolic trough system generates 1.8 GW worldwide with solar tower plants adding 70 MW more. The problem of intermittent sun and down time at night has been addressed by storing heat in tanks of synthetic oil or molten salt to give a more constant supply. The world’s first commercial solar plant with heat storage was in Gaudix, east of Granada.

If you drive through central Spain, you will see many solar farms. In fact, according to IRENA’s Renewable Energy Technologies: Cost Analysis Series (Concentrating Solar Power), “Spain is now the largest producer of CSP electricity [in the world] and there are several very large CSP plants planned or under construction in the United States and North Africa.” As of the start of 2012, Spain had 1.3 GW of operating capacity, compared to the U.S. with 520 MW and North Africa with 75 MW.

In Spain, wind power also means jobs, with a number of companies leading the way in global turbine construction and wind farm development. Gamesa (30 GW, 12 GW in Spain) was the sixth largest wind power company in the world by 2012 market share (4.6%), manufacturing a large range of turbines and building wind farms around the world. Other manufacturers and developers include Acciona Energy (164 wind farms, 4.5 GW), Alstom (a.k.a. Ecotècnia, 200 wind farms, 5.0 GW), Iberdrola, and Anelion.

The world’s largest steel company, Arcelor Mittal, is involved in the manufacturing of wind turbines at its Gijón plant in Asturias, providing steel plates to the main manufacturers, such as Gamesa, Vestas Eólica, Ecotècnia, Acciona, and Enercon. According to their design specs, “an 80 metre high tower requires about 174 tonnes of steel.”

For the first time, the five top sources of newly installed electricity in Europe were all renewable energies: wind, photovoltaics, hydro, biomass, and thermosolar. Good for Spain and the EU, which in 2009 agreed to collectively generate 20% of its energy from green sources by 2020 (compared to 9% by 2015 in the U.S.).

Given the dire warnings from the I.P.C.C. about rising temperatures in the last decade and their report that “To meet the 2-degree goal, annual spending on fossil fuel plants must drop by $30 billion a year by 2030, while annual expenditure on renewables, nuclear, and carbon capture and storage must rise by $147 billion” it seems that wind and sun are sound investments.

What’s not to like if the fuel is free? Imagine a country run entirely on renewable energy? Imagine a clean, safe, energy-sufficient world? Imagine modern Spain.

* The Earth receives about 120,000 TW of solar radiation at the upper atmosphere, of which about 30% is reflected back to space, while the rest is absorbed by clouds, oceans, and land masses.

I have worked as a writer, computational analyst, project manager, physicist, and lecturer during a 30-year career. I recently published the general trade book Do The Math! On Growth, Greed, and Strategic Thinking (Sage, 2012), aimed at improving general numeracy, and The House of Words (Tuttle House, 2013), a literary thriller starring New York Scrabble champ Suzy Q. I recently moved to Spain and started this Caracolas blog to record some of my experiences.
View all posts by johnkwhi →
This entry was posted in Spain and tagged economics, energy. Bookmark the permalink.

2 Responses to Renewable Energy in Spain: How the wind and the sun are changing our world