Translation 101: Our many language shores

In his play Translations, the Irish playwright Brian Friel wrote about the difficulty of describing place names in different languages and the meanings for native and visitor alike. Is the ancient local place name Poll na gCaorach (literally “hole of the sheep”) sufficient or does one need Poolkerry as anglicized by the modernizing English mapmakers in his play? How about Drumduff for Druim Dubh, which loses its meaning in translation (“black shoulder”)? Or what of Dublin itself, translated in Irish as Baile Átha Cliath, i.e., Town of the Hurdled Ford. Not quite the same as Blackpool, the Norse-English translation of Dubh Linn (Black Pool).

In Spain, I am noticing more and more translations, some that seem right, others a matter of opinion, as I map out my own new territory here. Especially, the virtual kind as seen in the titles and subtitles (titulos y subtitulos) to films and television shows.

Some are literal: Without a Trace – Sin Rastro, others hint at a connection: The Hurt Locker – In Hostile Land. Others try to elicit a meaning, perhaps giving more of the story than originally intended: Butch Cassidy and the Sundance Kid – Dos Hombres y un Destino in the famous Newman Redford buddy film, although the second film in their buddy series The Sting doesn’t quite work as El Golpe. A golpe is a hit, which for a Hollywood film suggests a film about murder and assassins. Proof is the story of an infirmed mathematician and his daughter, starring Gwynneth Paltrow, Jake Gyllenhaal, and Anthony Hopkins, but the Spanish title La Verdad Oculta suggests something more sinister. One wonders why Butch Cassidy y la Sundance Kid or Prueba are not sufficient. 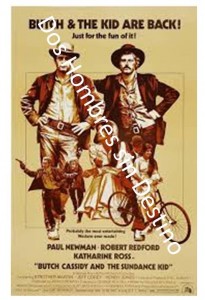 Not only titles but the text can be confusingly translated. In Proof, sandbox was given as tobogán, nerds as cerebritos, and glasses (of the drinking kind) oddly translated as gafas instead of vasos. One wonders if a machine translated that one. Describing the wake for Anthony Hopkin’s deceased math professor character, the innocuous “It’ll be nice” was translated as “Será divertido” (“It’ll be fun”). Okay, it’s hard to get these things right, but a nice wake is not the same as a fun wake.

In a commercial for coming attractions, Arnie’s famous line “I’ll be back” in The Terminator was reduced to “Vuelve.” I’ll have to watch to see how Hasta la vista, Baby comes out. Jack Nicholson’s famous “Here’s Johny” turned into “Aqui esta Jack.” Indeed. The Shining itself was El Resplandor, a direct and simple poetic translation.

It’s fun and jarring to see the differences. Idioms are obviously not the same in two different cultures. It can rain cats and dogs in Canada and the U.S., whereas in Spain it rains seas (llueve a mares). In English, “Sitting on your hands” becomes “no te cruces de brazos.” Task force is grupo especial. Charity is ONG. The World Series turns into The Davis Cup. Some words, of course, are untranslatable, and are left unchanged in their new languages. Many are of the food variety: chorizo, fabada, espicha (an Asturian cider fiesta).

Hopefully the humour, the romance, the sentiment is kept, but sometimes the translation comes out better. In Did you Hear About the Morgans?, the state of Connecticut was translated as “100 metres from Fifth Avenue” arguably funnier than the original when Sarah Jessica Parker’s character Meryl Morgan jokes that she never gets far from her Midtown Manhattan home. In the same film, Applebees was McTortillas, Amish was budista, Bloomingdales was rebajas – to me all much funnier than their originals – although the humour of taxidermist with the stress on taxi didn’t quite make it to taxidermista.

Names are fun too. John is one of the most common names around and being of biblical origin is translated into most languages: Juan (Spanish), Seán (Irish), Jean (French), Giovanni (Italian), …. The list is as wide as the world. I love my more mysterious sounding Asturian name, Xuan, where the X is a Sh sound. Most biblical names are also found elsewhere. And flowers. Daisy is Margarita in Spanish. Heather is Brezo. Lovely names, and to me, more exotic in translation.

Some rules help the language learner to take a stab at easy translations, especially when grouped according to type: -ible, -able, -tion, -ist, -ent, and -ant endings comprise over 1000 words. Possible becomes posible, agreeable agradable, conversation conversación, Buddhist budista, decadent decadente, dominant dominante. As Christian Slater’s hotel manager Daryl Timmons in Bobby says “It’s almost like you add an e to the end of every English word.” Not quite. But it’s a start.

Language is owned by all of us, changing, morphing, twisting and turning with every immigrant, ex-pat, and new student. About his latest story, Dublinés, a Spanish graphic comic version of wordsmith extraordinaire James Joyce’s Dubliners, writer Alfonso Zapico said that a lot of readers got the urge to read the original version after reading his adapted translation, although some in Ireland felt that “it’s kind of wrong that the author is not Irish.”*

I’m not so sure. I think the número uno ex-pat supreme himself would have been extremely proud that another language brought readers to his Irish shore.

I have worked as a writer, computational analyst, project manager, physicist, and lecturer during a 30-year career. I recently published the general trade book Do The Math! On Growth, Greed, and Strategic Thinking (Sage, 2012), aimed at improving general numeracy, and The House of Words (Tuttle House, 2013), a literary thriller starring New York Scrabble champ Suzy Q. I recently moved to Spain and started this Caracolas blog to record some of my experiences.
View all posts by johnkwhi →
This entry was posted in Spain and tagged funny, language, translation. Bookmark the permalink.

4 Responses to Translation 101: Our many language shores